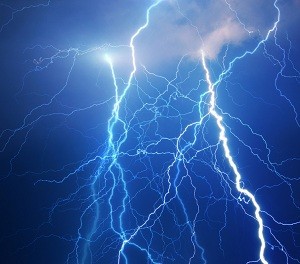 Did you know that a spike in electricity can damage your computers, TVs, appliances and other electrical components? Preventing electrical surge damage has traditionally been left to Centennial homeowners to guess at what to do. Must homeowners buy numerous power strips and surge protectors, and run around the house during a lighting storm trying to unplug everything. Get whole house surge protection installed by a professional Centennial electrician today!

Centennial whole house surge protection keeps your electrical devices safe from sudden surges and spikes in the electrical power supplied to your home. Whether caused by outside forces such as lightning or issues within your home such as tripped breakers and overloaded outlets, power surges can completely fry electrical devices. With a surge protector, however, the damages are nullified. Investing in lightning protection and surge arrestors can also prove to be much more cost effective than having to replace fried appliances, computers and entertainment systems.

At Barlow Electric, LLC, our Centennial surge protection experts can help you find the right surge arrestor for your home to ensure your electrical components are protected.

We provide Surge Protection in the following cities in Colorado:

If you are looking for a Centennial Electrician then please call 720-333-8427 or complete our online request form.